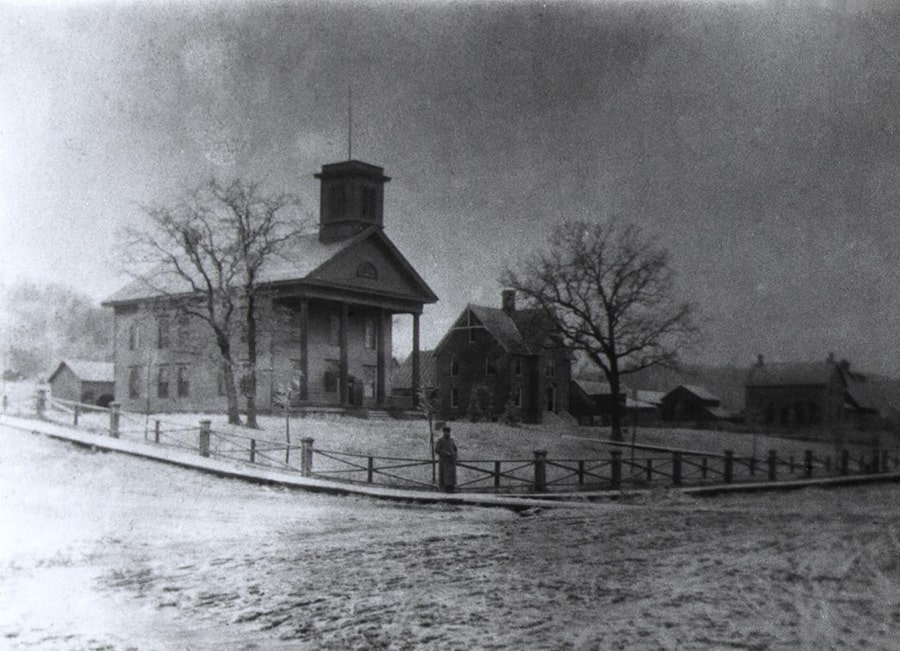 This building is now more than 140 years old. When built, it had no electricity or plumbing. As these technologies developed, they were added. The paneled walls, suspended ceilings, vinyl flooring and carpeting were installed while this structure was still a working courthouse...at times when more thought was given to what was is in vogue and useful than to what was historically accurate. However, several areas of the building are still close to original and will give you a good idea of what it looked like a hundred years ago.

From all directions, the Pepin County Courthouse dominates this one square block of downtown Durand, known as Washington Square. It is a two-story Greek Revival wood-frame building with a giant order open front portico. Decoration to the outside includes: the louvered square belfry atop the portico; a lunette window centered in the pediment; simple semicircular fanlight windows above the double front doors and above the back door; and, segmental-arched windows all around the building (still visible from the inside in the upstairs courtroom, but now covered on the outside by rectangular frames to accommodate the modern aluminum combination storm windows and on the inside by suspended ceilings).

It is the only remaining wood-framed courthouse in Wisconsin and one of only two Greek Revival style courthouses in the state. However, extensive interior remodeling, alterations to the windows, and installation of aluminum siding severely diminish this building's character as a true representative of that particular style of construction. Along the southwest wall in the main corridor are pictures showing different stages in the building's life.

This building is historically significant as the long-time center of Pepin County government; as a cultural and educational center; as a focal point in the development of the City of Durand; and, as a pivotal element in settling the turbulent thirty-year controversy surrounding the location of a county seat. To solidify its hold on the county seat, the Village of Durand, led by its founder Miles Durand Prindle, built this courthouse during the winter of 1873-74 on property owned by Miles and his wife, Ada, and deeded it to the county.

Nameplates on doors along the center hall identify county offices, where they may have been located at one time or another. However, which rooms housed which offices originally is anyone's guess.

The building's centerpiece is the courtroom on the second floor, featuring original walls, windows and woodwork, including the segmental arched windows. It's as close to the original as you will see.

The jail next door is attached to what was until 1984 the residence of the county sheriff. The jail is significant for its original iron lattice-work cells which are now rare in Wisconsin. The jail was still being used until 1984.

Though many significant events occurred in the old courthouse, the most notorious by far occurred in November of 1881. A man accused in the shooting death of a local deputy sheriff the previous July was lynched from an oak tree on Washington Square. As the prisoner was brought down the winding stairs following the preliminary hearing in the courtroom upstairs, law enforcement officers guarding the accused murderer were overwhelmed and subdued. A hangman's noose appeared seemingly from nowhere and was looped around the prisoner's neck. He was yanked by neck out the door, dragged across the porch, down the steps, over to a tree in the yard and pulled up into the air; still handcuffed and wearing leg irons. It was a chilling November afternoon for the good citizens of Durand, who had to endure for many years after the reputation as a "hangin' town".